Home » Health News » You Don't Look Sick: 'I was diagnosed with Parkinson's in my thirties' 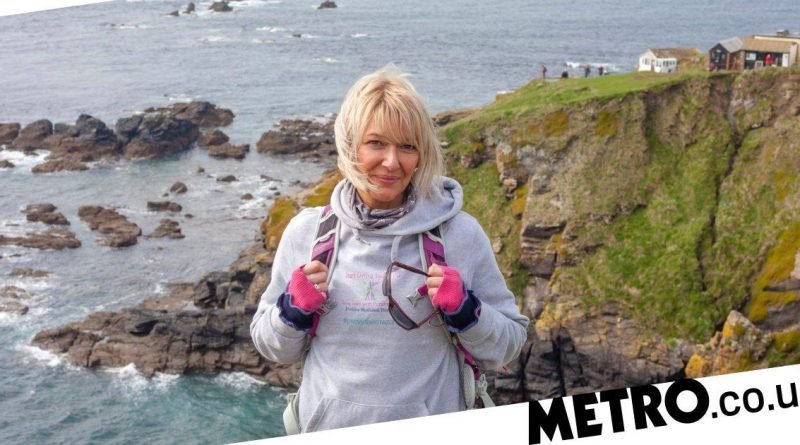 Welcome to our weekly look at the issues around invisible illness.

Thousands of people have invisible illnesses and disabilities but they are often judged for using disabled bathrooms, parking spaces or asking for a seat on the train because of how they look.

For You Don’t Look Sick, we speak to a different person each week about what it is like to live with a condition that causes debilitating symptoms but to the outside world, it looks like there is nothing wrong.

Heidi Reynolds, 42, who lives in Cornwall, has Parkinson’s, a progressive neurological condition that causes problems with the brain that get worse over time.

She was diagnosed in July 2014, at the age of 37 but started experiencing symptoms four and a half years prior to diagnosis.

She is now medically retired from her work as a Metropolitan Police sergeant and now works as the founder of a voluntary community network for people living with Parkinson’s called Start Living Today PD. She also produces sea glass art.

The condition is much less common in younger people like Heidi – just 1.2% of people with Parkinson’s are under 50.

She explains: ‘Other things just drip fed out – tremor, balance issues, cognitive difficulties, positional hypotension, constipation, stiffness, weakness on one side of my body.

‘Once I finally saw a neurologist,who also happened to be a young onset specialist, she seemed convinced after lots of further tests that I had Parkinson’s.

‘I took the medication for Parkinson’s for eight weeks and was formerly diagnosed at the conclusion of this period.

‘It became very obvious by my response to the medication however what I was facing in my return. They worked and worked well.

‘Being diagnosed was like a washing machine of emotions. It’s not unusual for it to take years because there’s no one diagnostic test.

‘I was relieved but also oddly, I was angry. Anger of “why me?” Fear with questions like “Will I end up in a wheelchair? What does the future look like?

‘There was defiance, sadness, loss, control, loss of control, numbness and round and round it went.

‘Eventually you find your own place because you can never fully accept something that is forever changing.

‘It will never change me though. It may change the packaging and fudge the brain a bit but I’m still me and always will be. Parkinson’s can never take that away.’

Heidi tried to stay fit and enjoys spin classes, paddle boarding and cycling but she feels that because some days she is able to do so much, people don’t fully understand the day-to-day impact of her condition.

She says: ‘For me the difficulty is that I don’t want to be treated differently but there are times I need more time or help, but I look fine.

‘People say: “Heidi, oh she’s fine. Honestly she looks so well she’s doing great.” But did anyone stop to ask me? Or just look at the outer packaging.

‘There’s a mouth wide open moment when you tell someone you have Parkinson’s. After that you get the “Are you sure?” look, the “Aren’t you too young?” question and the “At least you’re doing well” assumption.

‘People don’t see that I take medication crushed and in liquid form around six to eight times per day. I wear patches, I drink thickened liquids and won’t ever have turkey for my Christmas dinner again because I’d choke.

‘My throat muscles don’t work properly any more so it affects my ability to swallow and I choke on my own saliva. I have a special headrest for my bed supplied by occupational therapy.

‘I have to add a thickener to my drinks to make them wallpaper paste style.

‘It’s basically because it slows the drink rolling on my tongue giving my space cadet of a brain time to work out it has to shut off my airway. If I try to eat something like a satsuma, cherry tomato, apple anything that has liquid and food, stand clear.

‘My brain can’t cope with that level of multi tasking so I cough and splutter.

‘The danger with this is as you get older you become more prone to infection because you get weaker ie unable to cough all the liquid up from your lungs and hence pneumonia is a real threat.

‘Having got the liquid in, my body isn’t keen to release it either. My bladder muscles don’t work properly so I can still go to the loo but my bladder doesn’t fully empty.

‘My brain makes me think it has but not long afterwards I’ll be sprinting back to the smallest room in the house. Sadly and all too frequently, it’s too late – another unexpected joy at the age of 42.

‘I catheterise four times per day to get rid of the excess liquid.

‘Cognitively my brain doesn’t function properly either. I can’t read a timetable or if I were to arrive in a station or hospital anywhere with a lot of signs it’s a sea of information and it means nothing to me.

‘I have no concept of time and have a clock used for Alzheimer’s patients in my kitchen. I often can’t remember the year.

‘I struggle with financial issues and now have a power of attorney in place. These are hard things to accept at my age.

‘I have memory issues too. My husband and I went to look for new flooring and I literally have no recollection of the first visit we made to the shop. We had to go back. It can be quite good though. I often happily enjoy a meal enthusing over this new culinary delight my hubby has created only to be told we had it last week. Everything is a surprise!

‘It’s not everything though it’s random and my long term memory is sharp as.

‘Insomnia, fatigue, lack of appetite, not being able to pull up the right word mid sentence, constantly losing things if they aren’t put in their specific place, having signs around the house telling me to check my task (I write a board every morning with what I am doing that day so I stay focused because I’m so easily distracted) , turn lights out, turn taps off, know what to do at dinner time.’

The last year has been hard for Heidi after suffering two herniated discs and a knee injury but having to use crutches gave her another perspective on how people with invisible illnesses are treated.

‘Crutches are visible so suddenly you become someone people want to help,’ she says.

‘A visual aid is so powerful to people and also goes to show just how kind people are when they know.’

Heidi tries to be open about her condition but struggles with how people react to the issues she faces.

She says: ‘It’s impossible to fully understand unless you live with us so people just don’t believe things are as bad as we say they are (not that I’m sure why you’d want to say those things about yourself otherwise) but most come out with “oh I do that”.

‘This isn’t just going upstairs and forgetting why you went or forgetting the name of your neighbour’s cat.

‘I know most are trying to make me feel better but it takes quite a lot to admit to issues like these and it just isn’t helpful. People need to understand.

‘It’s the equivalent of saying to someone with a brain tumour “oh I get headaches too”. You just wouldn’t.’

Although the last few years have been hard, Heidi tries to see some positives.

‘I lost my career and it has changed my social life. It takes very understanding people in your life and very special friends.

‘On the other hand it’s also given us some amazing changes for the better. I would trade the lot for my health but if I’m saddled with this you have to look at it from the positive.

‘We moved to Cornwall, which is something we wanted to do for years. I can put my wetsuit in and go for a swim whenever I want and go paddle boarding or body boarding. The fitter I keep myself, the fitter and stronger I’ll stay.

‘I’ve found a real passion in my sea glass art too. I would have laughed if someone would have said that to me but in May I’m set to display my work in the Polpeor Gallery at Lizard Point for one week during half term. Never say never!

‘I’m a volunteer for the National Trust as a Ranger at their wildlife watchpoint at Lizard Point, mainland UK’s most southerly point. I regularly see dolphins, seals and a wide variety of sea birds to share with equally excited members of the public. I love it.

‘Life isn’t all bad and I have adapted it to fit my current needs thanks to the support of my husband.

‘I’m a great believer in a positive attitude and my favourite quote is “It’s not about waiting for the storm to pass it’s about learning to dance in the rain.” That’s exactly how I live my life. Don’t get me wrong I have my down days the same as anyone else but after a short time of feeling sorry for yourself you work out it really isn’t achieving all that much and you’re just missing out on the day so time to get on with living again.

‘Life changes with any chronic or progressive condition such as Parkinson’s obviously but it doesn’t mean you can’t adapt and make things the best they can be.

‘I get so much support from the Parkinson’s community on Facebook and across social media. I founded Start Living Today pd and the three words at the core of everything we do are positive, motivated and happy.

‘I have just under 8k followers across social media now and I speak at global conferences on positivity and my love of exercise.’

Through her group and by working with the Parkinson’s UK Parkinson’s Is campaign, Heidi wants to raise awareness of the condition and of invisible illness in general.

She says: ‘It’s about somehow taking disability out of a wheelchair. Of course disability very much has to do with a wheelchair but it’s so broad and the symbol so narrow.

‘You could name so many all disabilities all nothing to do with wheelchairs.

‘We need education from an early age to make people start to think more broadly in public facing roles so that awareness is greater.’

How to get involved with You Don’t Look Sick

If you have an invisible illness or disability and fancy taking part, please email [email protected]

You’ll need to be happy to share pictures that show how your condition affects you, and have some time to have some pictures taken.

MORE: You Don’t Look Sick: ‘I get told to take the stairs because I look healthy but I have stage four cancer’

MORE: You Don’t Look Sick: ‘I sneak out of the disabled toilet because I don’t want people to judge me’

MORE: You Don’t Look Sick: ‘Asthma caused me to be hospitalised after vacuuming’

The daily lifestyle email from Metro.co.uk. 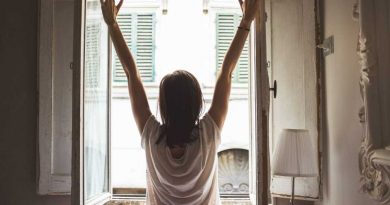 The importance of stretching throughout your workday 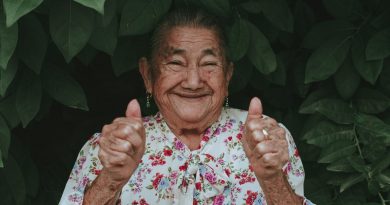 Do we really ‘lose our filter’ as we age?