Home » Health News » WHO issues warning as measles infects 34,000 in Europe this year 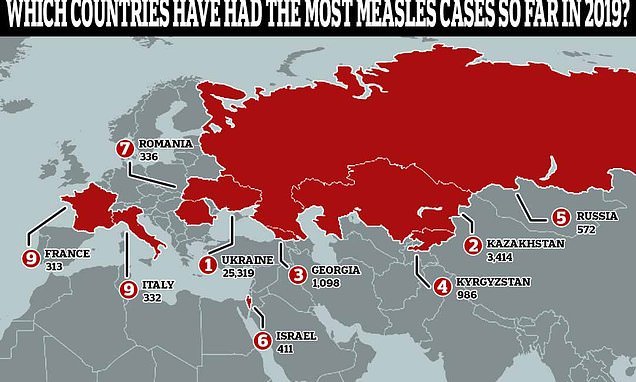 Measles outbreak in Europe on track to eclipse last year’s toll as official figures show 34,000 have already been struck down by the killer infection in the first two months of 2019

More than 34,000 people across Europe caught measles in the first two months of 2019.

Almost three quarters of cases were in Ukraine, the World Health Organization said today as it urged countries to make sure vulnerable people get vaccinated.

So far 13 people have died from the 34,300 cases reported across 42 countries in the WHO’s Europe region, which includes Russia and some Middle Eastern nations.

People in Ukraine – which is suffering a measles epidemic – died of the infection as well as patients in Romania and Albania.

Outbreaks may continue to spread, the WHO warned, and the figures suggest there will be more cases this year than last, reflecting a worldwide increase. 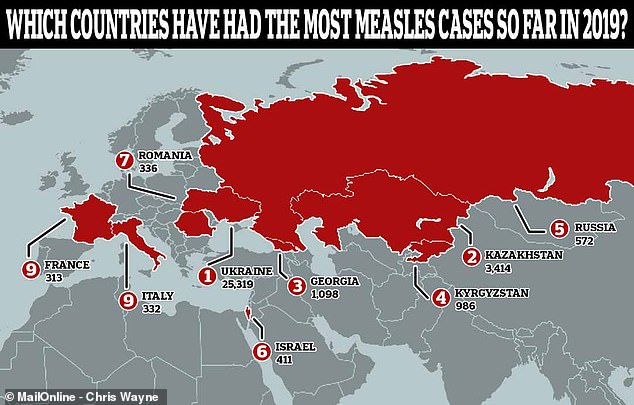 More than 34,000 people across Europe caught measles in the first two months of 2019. Almost three quarters of cases were in Ukraine (pictured, the nine countries in Europe with the most cases in January and February this year)

‘If outbreak response is not timely and comprehensive, the virus will find its way into more pockets of vulnerable individuals and potentially spread to additional countries within and beyond the region,’ the WHO said in a statement.

‘Every opportunity should be used to vaccinate susceptible children, adolescents and adults.’

Measles is a highly contagious disease which can kill and cause blindness, deafness or brain damage.

It can be prevented with two doses of an effective vaccine, but is currently spreading in outbreaks in many parts of the world including in the United States, the Philippines and Thailand.

In Ukraine, where the majority of Europe’s cases have been this year, more than 25,000 people were infected in January and February.

In the entire of 2018 there were 83,540 cases recorded in the European region – this year the numbers were almost halfway there already in April.

There is no specific treatment for measles and vaccination is the only way to prevent it, the WHO said.

Most cases are in unvaccinated or under-vaccinated people.

She said in November: ‘Over 30 years, we have vaccinated millions of children. It is a safe vaccination, we know that, and we’ve saved millions of lives across the world.

‘People who spread these myths, when children die they will not be there to pick up the pieces or the blame.’

One myth is based on research done by Andrew Wakefield in the 1990s which claimed MMR led to autism, but his results were later found to be fake, and the work was called ‘fatally flawed’, ‘fraudulent’ and ‘dishonest’ by experts in the field.

Others claim the vaccine doesn’t work – but after the introduction of MMR in 1963, global measles deaths dropped, on average, from 2.6million to around 100,000, according to the WHO.

The figure has fluctuated since, believed to be partly due to the Wakefield scare in the mid-90s, but in 2017 there were reports of only 1,693 measles cases in England.

The UN body added that even though the region had its highest ever estimated coverage for the second dose of measles vaccination in 2017 – around 90 per cent – some countries have had problems.

In some areas vaccination rates are falling or stagnating, some marginalised groups have low coverage – certain religions, for example – and there are immunity gaps in older populations.

The WHO urged health authorities across the continent to make sure vaccines are available to everyone.

‘The impact on public health will persist until the ongoing outbreaks are controlled,’ it said.

And it added governments should ‘identify who has been missed in the past and reach them with the vaccines they need.’

The number of measles cases around the world has shot up by 300 per cent in the past year, the WHO warned last month.

Four times as many cases were reported between January and March 2019 than in the same period in 2018.

In January, February and March, 112,163 measles cases were reported across 170 countries – the majority of them were in Africa, followed by Europe.

During the same period last year, only 28,124 cases were reported, and South-East Asia was the worst affected.

A report by children’s organisation UNICEF last month found that more than 20million children per year missed out on measles vaccines across the world in the past eight years, laying the ground for dangerous outbreaks.

Around 527,000 children in the UK did not receive the potentially life-saving jab between 2010 and 2017, with ‘fake news’ spread on social media partly to blame.

The UK comes third in a global ranking showing the number of unvaccinated children in high-income countries.

The US topped the charts, with 2,593,000 youngsters not receiving their first measles dose over the eight-year-period.

Simon Stevens, the head of the NHS in England, said: ‘With measles cases almost quadrupling in England in just one year, it is grossly irresponsible for anybody to spread scare stories about vaccines.

‘And social media firms should have a zero tolerance approach towards this dangerous content.’ 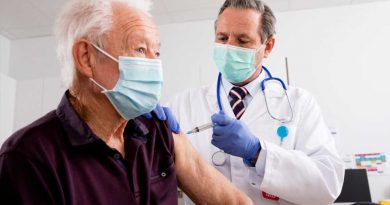 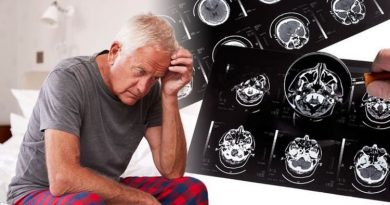