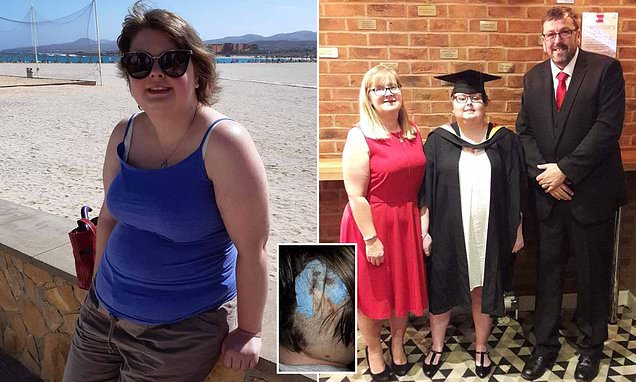 A student’s headaches she thought were caused by exam stress were in fact caused by a brain tumour the size of a golf ball.

Rhiannan Harris, 23, began having regular headaches that felt like ‘someone was holding a hand drill to her temple’ at the end of her studies in May 2018.

She also noticed her vision had become blurry, but expected she needed another eye test having worn glasses since she was a child.

Opticians noticed something was wrong and immediately referred her to hospital, where doctors believed there was fluid-filled cyst on her brain.

What was supposed to be a four-hour surgery to drain the cyst turned into a nine-hour marathon op when doctors discovered that there was in fact a large benign brain tumour.

Miss Harris went into cardiac arrest twice and was put into an induced coma after surgeons had removed as much of the mass as possible.

Her speech, balance and co-ordination have since become limited, and she has been fitted with a shunt to drain fluid from her brain, putting her master’s degree in forensic science on hold. 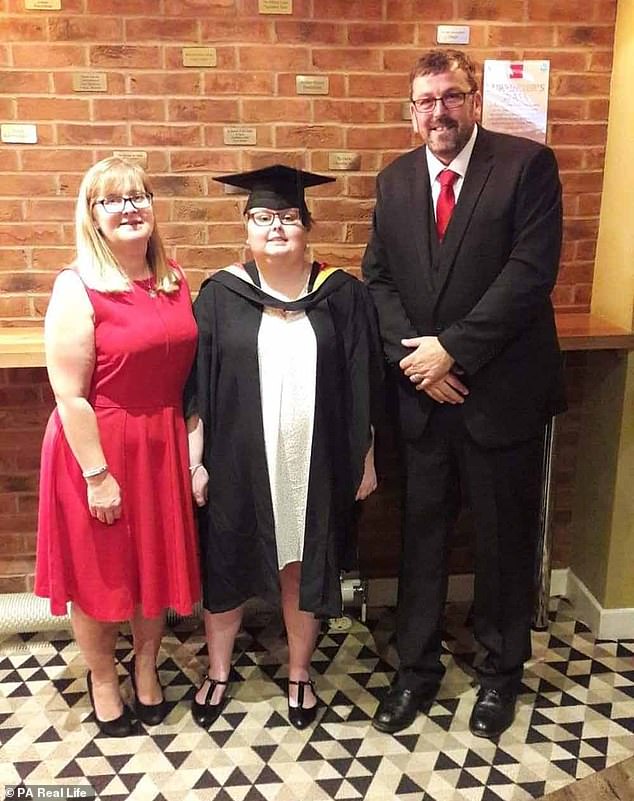 Rhiannan Harris, 23, began having headaches in May 2018 but assumed it was from exam stress as she had just graduated (pictured, with her parents Paul and Kim) 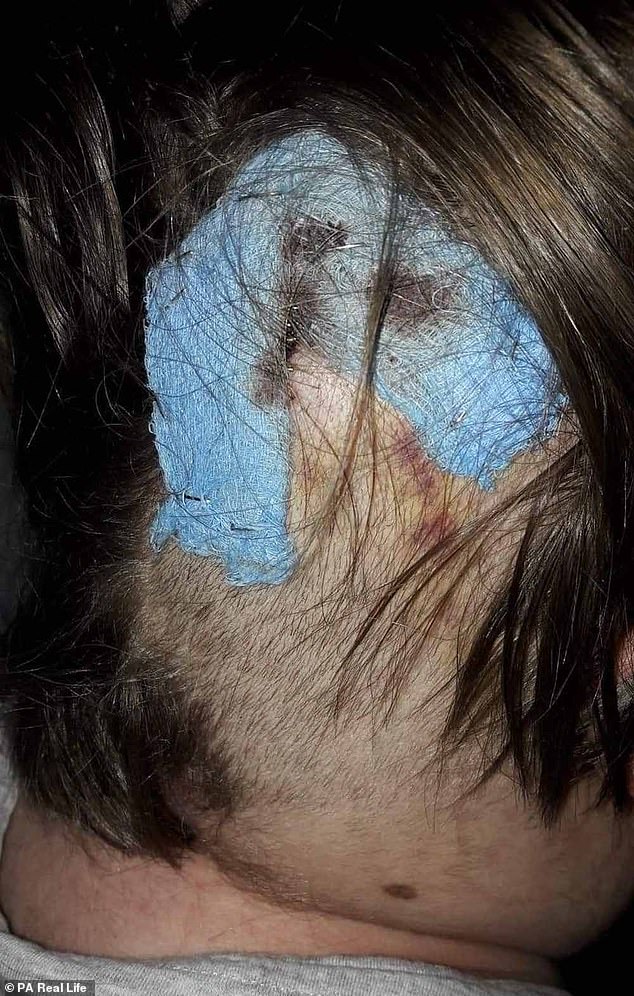 Miss Harris’ symptoms, including blurred vision, turned out to be a golf-sized brain tumour. This left her with hydrocephalus, a build up of fluid on the brain, which needed a shunt fitting (pictured)

Miss Harris, of Kettering, Northamptonshire said: ‘I’ve suffered from migraines since I was a teenager but I’d never had anything as regular or painful as these before.

‘Every other day it was like someone was holding a hand drill to my temple and slowly turning the crank.

‘Looking back, it was clearly a red flag, but at the time I put it down to post-exam stress.’

Miss Harris had just finished her degree at the University of Wolverhampton in the West Midlands in May 2018 when she went on a trip to Tunisia with her parents, Paul, 53, a construction manager, and Kim, 49, a retail manager.

She said: ‘Looking into the distance I noticed a slight deterioration with my regular glasses on.

‘It was like I was looking through a pair of binoculars just slightly out of focus, but as soon as I put my sunglasses on everything instantly became clearer.

‘I just assumed my prescription had changed a bit and thought nothing of it.

‘Never in a million years could I have imagined that a few slight changes in my sight were the result of a brain tumour.’ 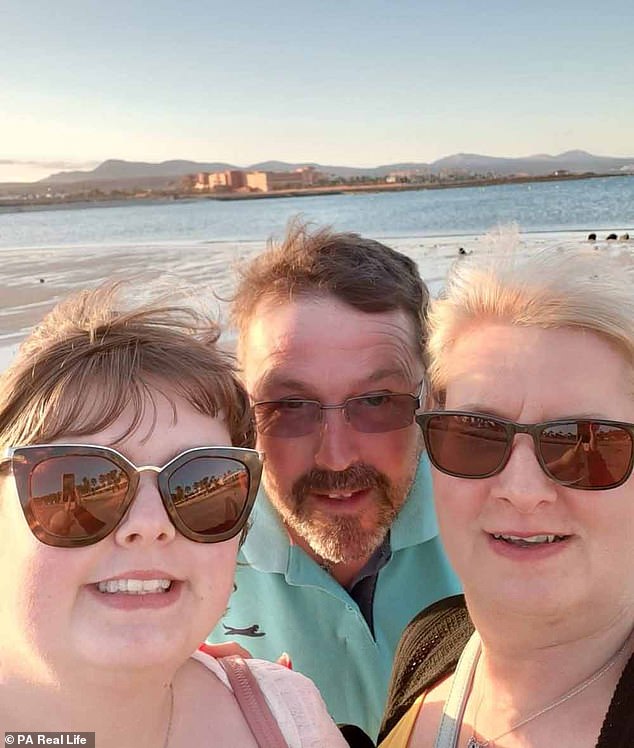 Miss Harris noticed her vision had become blurry while on holiday in Tunisian with her parents, but expected she needed another eye test having worn glasses since she was a child 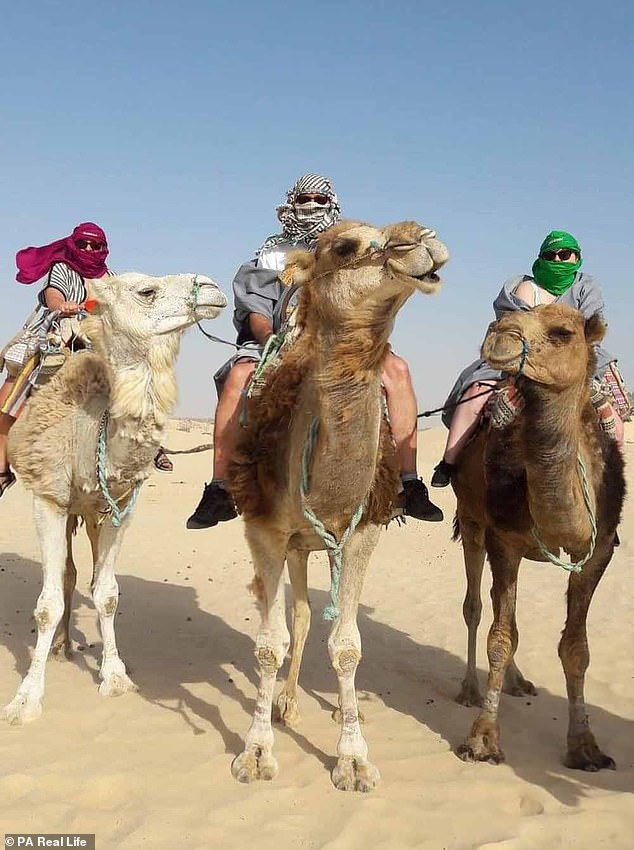 When Miss Harris, pictured riding a camel with her parents in Tunisia, returned to the UK, she booked an appointment at Vision Express. Opticians immediately referred her to Kettering General Hospital after spotting swelling on her optical nerve 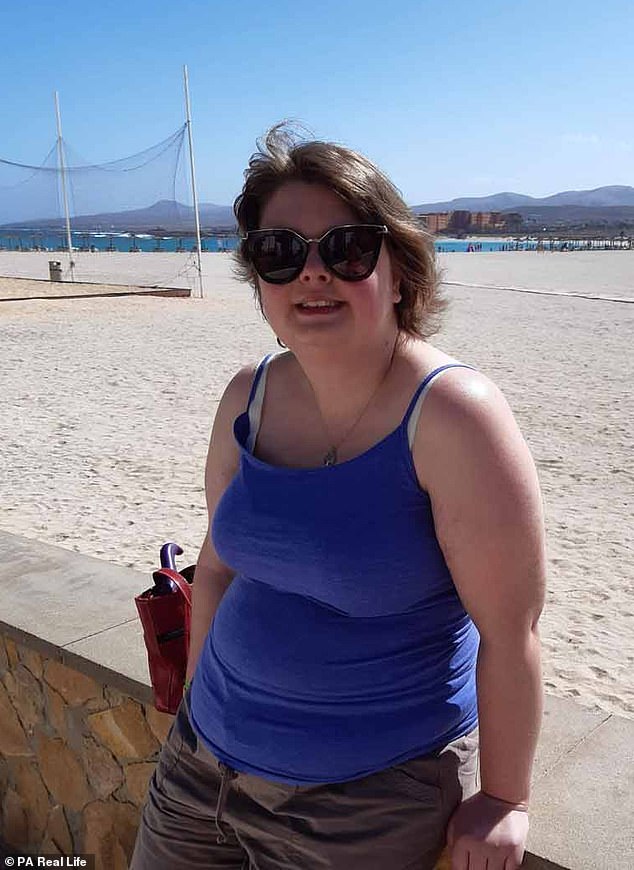 Miss Harris had a nine-hour operation when doctors discovered a large benign brain tumour made of hard tissue mass. She went into cardiac arrest twice and was put into an induced coma, after surgeons removed as much of the mass as possible. Pictured before

Two weeks after returning from her holiday, on June 13 2018, Miss Harris booked an appointment at her local Vision Express.

Opticians immediately referred her to Kettering General Hospital after spotting swelling on her optical nerve.

WHAT IS A BENIGN BRAIN TUMOUR AND WHAT ARE THE SYMPTOMS?

A benign brain tumour is a mass of non-cancerous cells that grows relatively slowly.

Non-cancerous brain tumours tend to stay in one place and do not spread.

The cause of most non-cancerous brain tumours is unknown, but the NHS states risk factors are being over the age of 50, family history of brain tumours, a genetic condition such as neurofibromatosis type 1 and type 2, and radiotherapy treatment.

If the tumour can be completely removed in one surgery, it will not usually return.

If not, there is a risk it can grow back.

Although brain tumours grow slowly, there is limited space inside the skull and the brain occupies most of it.

Overtime, the mass can grow into the spinal cord or press on surrounding nerves.

Treatment may not be necessary if the tumour is growing at a controlled pace.

Surgery can also damage the nerves that surround the tumour, as well as putting patients at risk of stroke and swelling when the mass is removed.

Controlled doses of radiation, such as gamma knife treatment, can target a hard-to-reach tumour, without harming surrounding tissue.

After MRI and CT scans, doctors detected what they thought was a fluid filled cyst on her brain, keeping her in hospital under observation for 10 days to ensure it was not increasing in size.

Miss Harris said: ‘It wasn’t the best news, but it also wasn’t the worst news either.

‘I didn’t panic as I just kept reminding myself that I was in hospital, surrounded by experts who knew what they were doing.

‘If I let myself, I could have gone to a very dark place, but I could tell from looking at them that my parents were overwhelmed by the whole thing and I wanted to hold it together for them.’

Two weeks after being discharged with painkillers, Miss Harris was scheduled for a craniotomy operation at Oxford’s John Radcliffe Hospital on July 27.

The procedure involved making a small hole in the skull, so that the cyst could be drained of fluid to alleviate the pressure on the brain.

She said: ‘Having a hole drilled into my skull wasn’t exactly how I planned on spending my first summer as a graduate, but doctors assured me I was in good hands and I’d be “in and out” within four hours.

‘Waking up and being told I’d had a brain tumour removed instead of having a cyst drained and that I’d effectively died twice, well, it was a lot to take in.’

A week after the operation, a biopsy confirmed that the tumour was benign , but with surgeons unable to remove all of it, she will have to have regular MRI scans to keep an eye on the leftover nodules and ensure they do not begin to spread.

Miss Harris said: ‘The surgery really impacted on every aspect of my day to day life. My speech, balance and co-ordination were all suddenly really limited.’

Weeks after being discharged from hospital, on September 5, Miss Harris was readmitted to hospital after feeling like her head was ‘about to explode.’

She was diagnosed with hydrocephalus, a build up of fluid on the brain, as a result of the tumour.

The excess fluid puts pressure on the brain, which can damage it. If left untreated, hydrocephalus can be fatal.

Doctors fitted a shunt, which is a thin tube that drains fluid from the brain into the stomach, so it can be reabsorbed into the body.

This was a particularly hard blow as Miss Harris had been hoping to start a master’s degree, having been fascinated by forensic science since childhood. 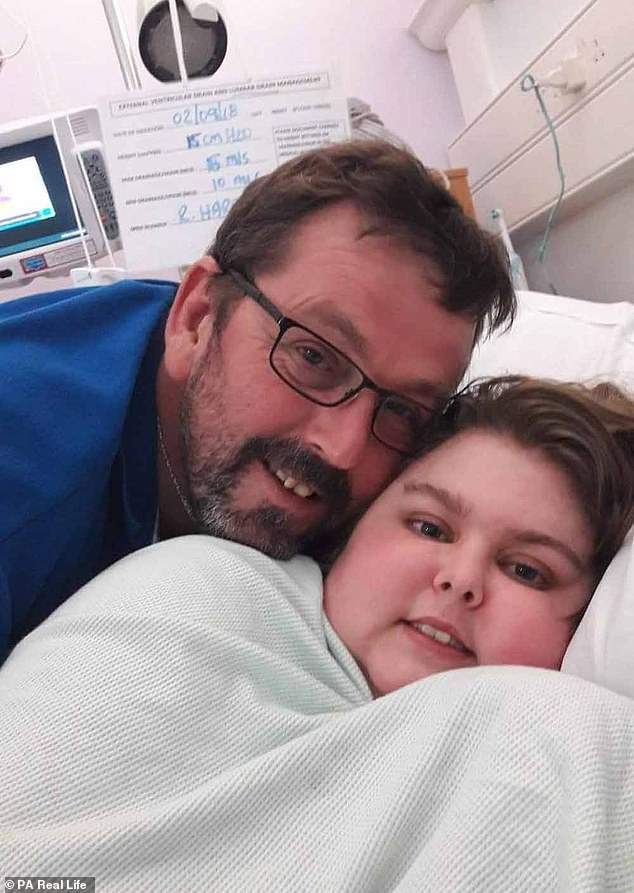 Miss Harris has had to pause her master’s degree due to set backs in her recovery. Pictured in hospital with her father after having a shunt fitted 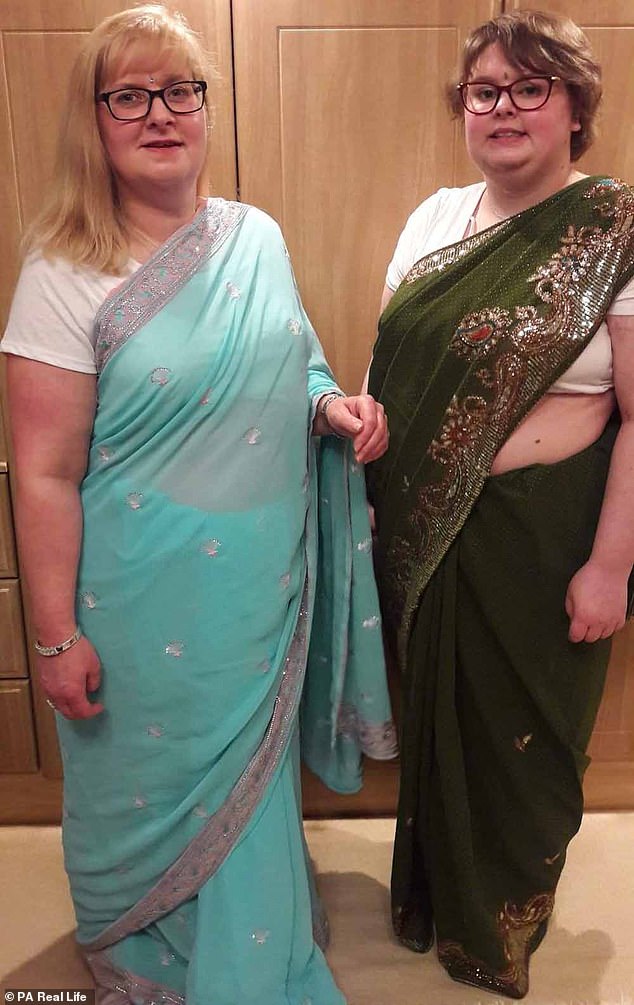 Miss Harris, pictured with her mother at a party, said: ‘Waking up and being told I’d had a brain tumour removed instead of having a cyst drained and that I’d effectively died twice, well, it was a lot to take in’

But the hydrocephalus had set her back, meaning she needed more time to recover before she could contemplate committing herself to further demanding studies.

She said: ‘All my friends were starting their graduate jobs or master’s degrees and there I was, having another set back to my recovery.’

Miss Harris was initially confined to a wheelchair and having weekly physiotherapy sessions, but slowly began to build up the strength to walk with a frame.

She said: ‘Standing in front of all my peers and being able to pick up my diploma was a real boost.

‘It proved that I was just as capable as everybody else, it just took a little bit more hard work.’

It will now be at least September 2020 before Miss Harris returns to her forensic science studies.

In the meantime, she has been working with Vision Express to make people aware of the importance of having regular eye tests.

She said: ‘I put in the application papers and began planning to return to university this year but as it got closer and closer I realised – I’m just not ready.

‘It’s been tough losing my independence in such a massive way, I’ve gone from three years of being my own person, to suddenly being trapped back at home with my parents.

‘But I still thank my lucky stars that I went to the optician’s when I did, as if I’d left it, I might not have been here today.

‘I’ll forever be grateful to the team at Vision Express and the doctors and nurses who have helped me during my recovery.

‘I’ve had to put my life on hold for 12 months because of all this, but every day I remind myself it could have been a whole lot worse.’

Vision Express offers an eye test to best practice guidelines of the College of Optometrists (COO), with each Vision Express optometrist being a qualified eye health professional. 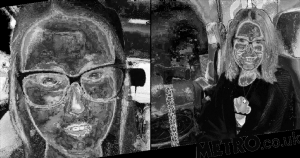 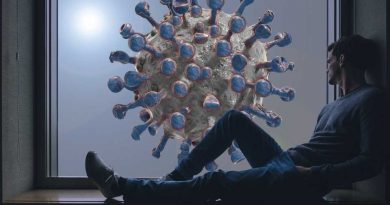