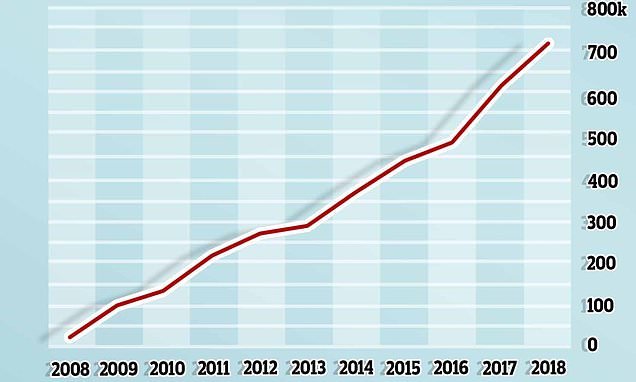 The number of people taken to hospital because of fat-related conditions shot up by 15 per cent last year.

More than 700,000 people seen in hospitals in England needed help for a problem which was either caused or made worse by the fact they were obese.

Women are almost twice as likely to end up in hospital because of their weight, and last year more fat women were hospitalised than people in total in 2014-15.

The NHS blames people’s junk food habits for adding to a growing obesity problem which has led to more than a quarter of all adults becoming dangerously overweight. 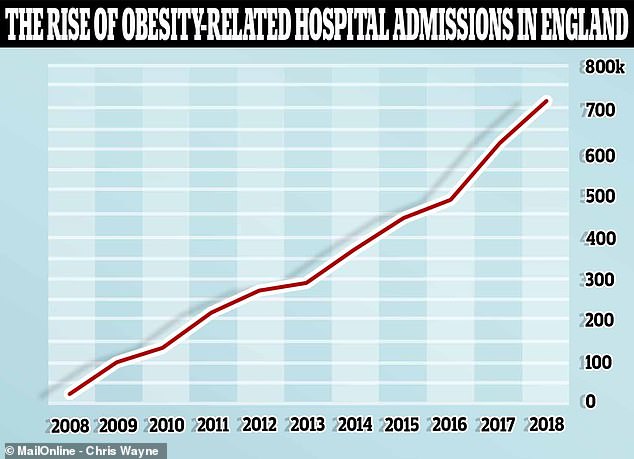 The number of hospital admissions in England in which obesity was listed as a main or contributing cause of someone’s illness rose by nearly 800 per cent between 2008 and 2018, with more than 700,000 such visits last year

Figures released today by NHS Digital showed there were 710,562 hospital admissions in 2017-18 in which obesity was a primary or secondary cause.

Arthritis in the knees and hips, pregnancy complications, gallstones and heart disease were the most common obesity-related illnesses.

Issues during pregnancy may partly explain a gender gap in the hospital admissions – last year there were 466,978 women admitted and 243,565 men.

Women who are obese when pregnant are more likely to develop gestational diabetes or pre-eclampsia, or to have a miscarriage.

‘These are tragic numbers which are escalating quickly,’ Tam Fry, chair of the National Obesity Forum, told MailOnline.

‘A real problem for women who have had children is not reverting back to their pre-pregnancy weight.

‘Men care less about their weight so are less likely to seek hospital treatment, whereas women are more likely to present.’ 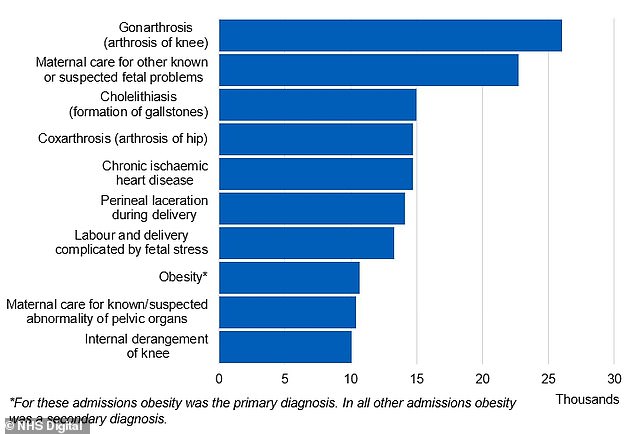 The most common conditions with which obese people are admitted to hospital include arthritis of the knee and hip, pregnancy complications, heart disease and gallstones

And although the NHS attributes some of the rise to improved recording, hospitalisations have increased alongside obesity rates.

Mr Fry added: ‘We have experienced a rise in obesity because we fail, in this country, to take obesity seriously.

‘The Government has never taken obesity seriously and we have a dearth of courses like Weight Watchers and Slimming World where people can lose weight.

‘They do exist but not in the numbers we’re seeing here.’

And the same people are less likely to be able to afford to join a gym or slimming club, he said. 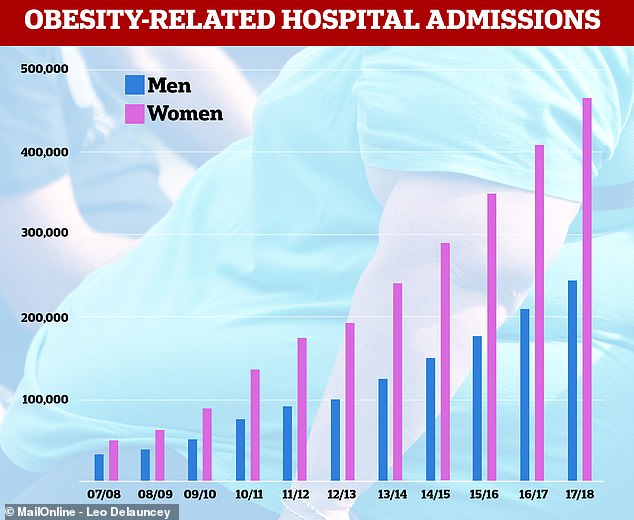 Women are more likely to be admitted to hospital because of obesity-related health problems than men, and the gender gap has widened over the past 10 years, NHS figures show

The NHS today called on food and drink companies to do their part to crack down on obesity in England.

‘With almost 100,000 more hospitalisations in just one year, this is the latest evidence that obesity is causing deadly diseases including 13 types of cancer, heart attacks, strokes and type 2 diabetes, while putting increasing strain on NHS staff and services,’ said Simon Stevens, chief executive of NHS England.

‘The NHS is stepping up to treat these conditions, but it’s clearly time for manufacturers and retailers to protect our children and young people by making further reductions in junk calories and excess sugar and salt that is quietly being added to processed food and drink.’ 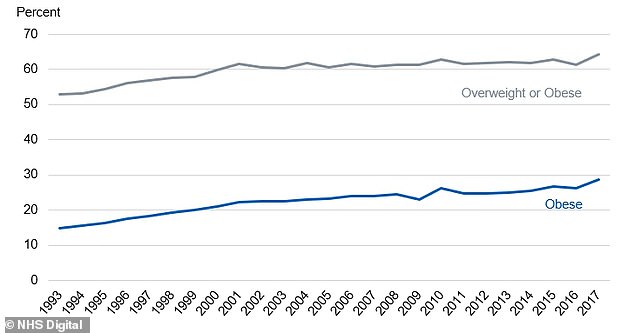 Although improved recording by the NHS may contribute to higher obesity admission figures, they are increasing in line with obesity rates in England – 29 per cent of adults are now dangerously overweight, up from around 15 per cent in 1993

WHERE ARE THE MOST OBESITY-RELATED HOSPITALISATIONS IN ENGLAND?

WHERE ARE THE FEWEST OBESITY-RELATED HOSPITALISATIONS?

Overall in England there was approximately one hospital spell caused by obesity for every 75 people.

In some areas, however, this was more than doubled. The worst affected – Wirral, for example – had one for every 28 people.

While in the best off area, Wokingham, it was more like one in 319.

About 29 per cent of English adults are now obese, almost double the approximately 15 per cent in 1993. Some 64 per cent are overweight to some degree.

There are more fat men than women – four in 10 men are overweight, compared to three in 10 women – but women are more likely to be obese.

And morbid obesity – in which someone’s weight is a serious health condition that limits their daily life – has increased from one in 100 people to four in 100 over the same period.

WHAT IS OBESITY? AND WHAT ARE ITS HEALTH RISKS?

Obesity is defined as an adult having a BMI of 30 or over.

A healthy person’s BMI – calculated by dividing weight in kg by height in metres, and the answer by the height again – is between 18.5 and 24.9.

Among children, obesity is defined as being in the 95th percentile.

Percentiles compare youngsters to others their same age.

For example, if a three-month-old is in the 40th percentile for weight, that means that 40 per cent of three-month-olds weigh the same or less than that baby.

The condition costs the NHS around £6.1billion, out of its approximate £124.7 billion budget, every year.

This is due to obesity increasing a person’s risk of a number of life-threatening conditions.

Such conditions include type 2 diabetes, which can cause kidney disease, blindness and even limb amputations.

Research suggests that at least one in six hospital beds in the UK are taken up by a diabetes patient.

Obesity also raises the risk of heart disease, which kills 315,000 people every year in the UK – making it the number one cause of death.

Carrying dangerous amounts of weight has also been linked to 12 different cancers.

This includes breast, which affects one in eight women at some point in their lives.

Among children, research suggests that 70 per cent of obese youngsters have high blood pressure or raised cholesterol, which puts them at risk of heart disease.

And if children are overweight, their obesity in adulthood is often more severe.

As many as one in five children start school in the UK being overweight or obese, which rises to one in three by the time they turn 10. 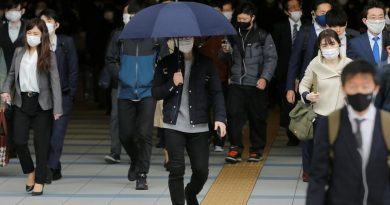 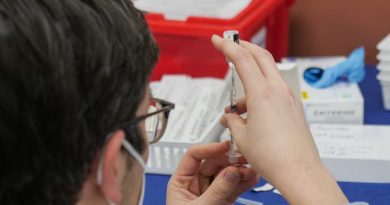 Shingles is not caused by COVID-19 vaccines. Here’s the science 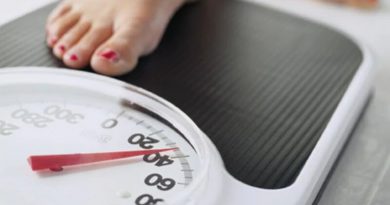