Japanese researchers have successfully produced potent neutralizing monoclonal antibodies from a patient who recovered rapidly from a severe case of COVID-19. In addition to appearing to have the world’s strongest neutralizing activity, the newly developed antibodies have extraordinary binding activity against viral spike proteins. By blocking these bindings, it can prevent infection and reduce the severity of the disease. The antibody was also found to have a neutralizing activity against many variant strains.

Among patients with COVID-19 infections, 20 percent become severely ill and 5 percent become critically ill, but there is still no effective treatment. Although current vaccines have been effective against the virus so far, variants, like the beta and delta strains, have been reported to be less effective. Furthermore, the pandemic is expected to continue for some time since vaccine effectiveness varies between individuals and some people remain unvaccinated.

In response, a research collaboration based in Kumamoto University, Japan have been working to develop a treatment using neutralizing antibodies to prevent infection and reduce the severity of the disease.

Two COVID-19 cases with strong neutralizing activity in their serum were selected from patients who recovered after having severe illness. Antibody copies (clones) were made from their peripheral blood B cells, and 88 of the 1,102 clones showed binding activity to the SARS-CoV-2 viral spike protein. Neutralizing activity among these 88 clones was examined using a pseudovirus that expressed the same spike protein as SARS-CoV-2, and five clones showing significant activity were selected.

Four important SARS-CoV02 variants are the alpha (B.1.1.7), beta (B.1.351), gamma (P.1), and mink cluster 5 strains. These strains have been reported to be resistant to the antibodies induced by current vaccines and the mink cluster 5 strain also has important implications for the evolution of the virus in animals, which could be the source of the next pandemic strain. The research group created pseudoviruses with the spike protein mutation of each variant and measured antibody cross-neutralizing activity. Strains B.1.1.7 and mink cluster 5 were neutralized by the 9-105, 10-121 and 8-92 antibodies at naturally occurring concentrations. In contrast, variants B1.351 and P.1 were neutralized only by antibodies 9-105 and 10-121, and 9-105 neutralized even the most neutralization-resistant strain, B.1.351, at low concentrations.

Importantly, researchers also found that the 9-105 antibody maintains sufficient neutralizing activity against the delta strain (B.1.617.2), which has become a worldwide problem. 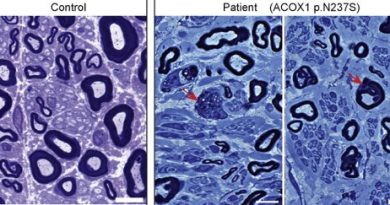 Solving the puzzle of Mitchell disease

AKI Occurs in 7 Percent of Those Hospitalized With COVID-19