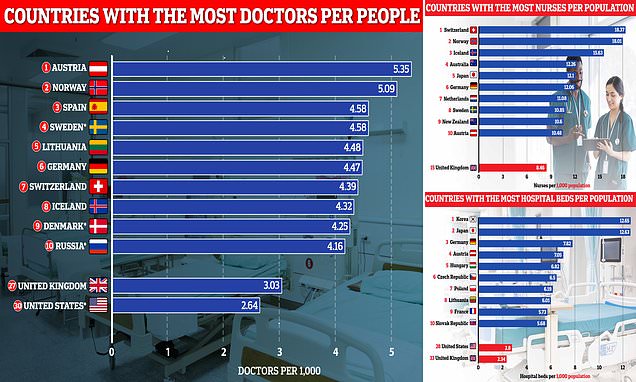 How UK’s health system REALLY compares to Scandinavia: As Jeremy Hunt demands Swedish-esque quality in the NHS, data shows how UK has HALF the number of nurses and doctors

The UK should aim for a health service that is as good as those in Denmark, Norway and Sweden, the Chancellor said today as he announced his autumn budget.

Jeremy Hunt today urged the NHS to strive for ‘Scandinavian quality’ to provide better outcomes for patients and better value for taxpayers.

Despite being given more than £150billion for 2022/23, the health service is plagued by record backlogs, crippled emergency services and tumbling cancer care.

Meanwhile, Scandinavian countries are lauded for having some of the best healthcare in the world due to their top-quality hospitals, doctors and care.

But official figures show the nations have a better-resourced health service, while studies suggest they have a healthier population — who exercise more and eat more nutritious food. This suggests that an equally good health service won’t be achieved overnight in the UK.

Sweden, Norway and Denmark have up to twice as many doctors per patient as the UK, thousands more hospital beds and better survival rates.

Meanwhile, two in 10 people in the Nordic nations are obese, compared to three in 10 in Britain. The more people who weigh too much, the higher rate of illness. 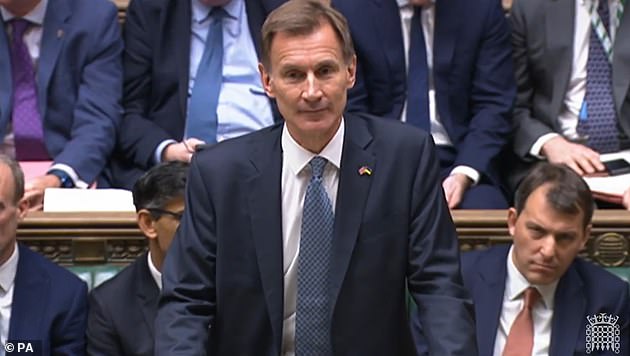 The Chancellor, a former Health Secretary, simultaneously pledged to give the ailing health service an extra cash injection 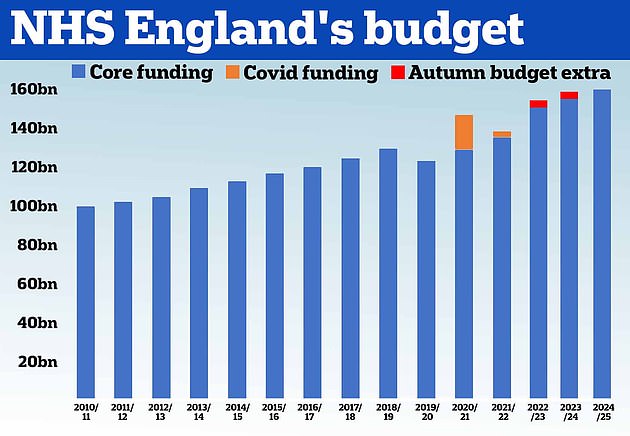 HM Treasury data shows the NHS annual budget. In 2020/21, the NHS was given £129.7billion of core funding for its usual services, which was topped up with an extra £18billion to help with the pressures from the pandemic. For 2021/22 the Treasury said the health service received £136.1billion pounds of core funding, as well as £3billion to help with the Covid recovery. The health service has been allocated £151.8billion for 2022/23 and £157.4billion for 2023/34. The Autumn Statement topped up these figures by £3.3billion each

Mothers in the UK are over three times more likely to die during pregnancy or within a year of giving birth than in Norway, a study reveals.

A comparison of eight high-income European countries found only Slovakia had worse rates of maternal deaths.

Analysis of more than two million UK births showed heart disease and suicide were the leading causes of death among new mothers, suggesting that rising obesity and mental health issues are to blame.

Yet in more than half of cases in Britain, doctors are failing to record links to maternity on death certificates, obscuring the full scale of the crisis, the researchers suggest.

Half of the UK deaths occurred in the 12 months following birth, pointing to shortcomings in postnatal care.

It follows a report last week that the number of women who died up to six weeks after having a baby has leapt by a quarter in five years.

Some 229 mothers died alongside 27 of their babies between 2018 and 2020, with many of the deaths ‘avoidable’. A further 289 women died between six weeks and a year later.

Denmark, Norway and Sweden have up to twice as many doctors and nurses per person than the UK. There are also up to 50 per cent more beds, in relation to population size.

On top of this, people in Scandinavia can expect to live up to three years more than Britons. Cancer survival, avoidable deaths and infant mortality rates are all better among the three nations than the UK.

This is despite the UK spending 12 per cent of its GDP on health in 2021, compared to as little as 10 per cent in Norway.

Detailing his Autumn Statement, Mr Hunt said: ‘The NHS budget has been increased to record levels to deal with the pandemic and today I am asking it to join all public services in tackling waste and inefficiency.

‘We want Scandinavian quality alongside Singaporean efficiency — both better outcomes for citizens and better value for taxpayers.

‘That does not mean asking people on the frontline — often exhausted and burned out — to work harder, which would not be fair.

‘But it does mean asking challenging questions about how to reform all our public services for the better.’

The UK has one of the worst obesity rates in the world.

Ranked against 200 countries, the UK is 29th fattest with 28 per cent of adults being classed as obese.

People who are obese — classed as having a BMI over 30 — are more likely to develop type 2 diabetes, coronary heart disease and cancer.

Rates of high blood pressure and high cholesterol, as well as respiratory, musculoskeletal and liver disease, are also higher among obese people.

With an extra 5 per cent of people in the UK obese, the NHS is more likely to have more patients to treat. 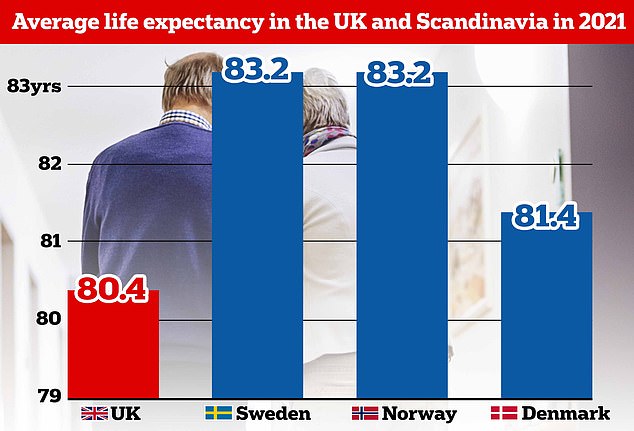 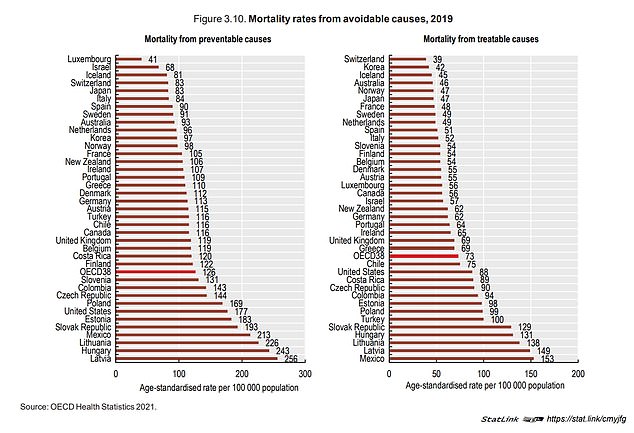 Graph shows: The proportion of people dying from preventable (left) and treatable (right) causes in countries across the world

Britain ranked 27th in the world for average life expectancy in 2020, the latest date OECD data is available for the country.

Adults live up to 80.4 years old on average in the UK, slightly less than the average of 80.5 for the 38 countries that were analysed.

The two Scandinavian countries have ranked above the UK consistently since 1960, when records first began. The average was 70.8 then in the UK compared to 73.8 in Norway and 73.1 in Sweden.

Denmark ranked slightly lower than its neighbours in 2021 at 81.4, but was still higher than the UK and average of all the countries. 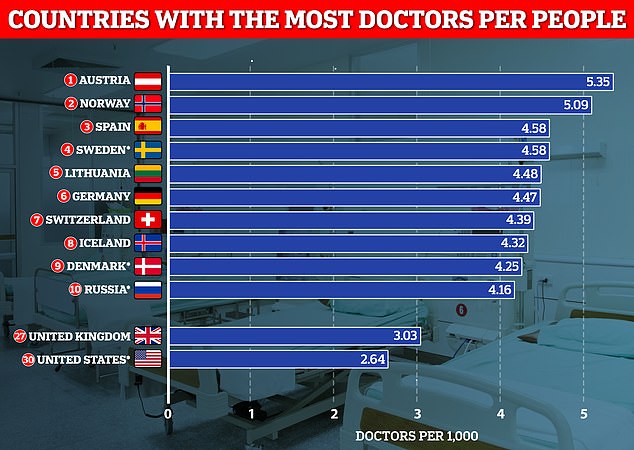 Graph shows: The top 10 countries for doctor per 1,000 in the world and the UK and US. Norway, Sweden and Denmark all rank highly compared to other nations and are significantly above Britain. Note: * indicates 2019 data

Britain’s low number of physicians ranked the country 27th out of 39 in the countries analysed by the OECD, with staffing clearly an issue in the NHS.

Jeremy Hunt on Thursday told the health service to create a long-term workforce plan, outlining the number of nurses, doctors and other medics it needed over the next 5, 10 and 15 years.

The Chancellor had previously called for a long-term staff plan in his previous role as chair of the Health and Social Care Select Committee. 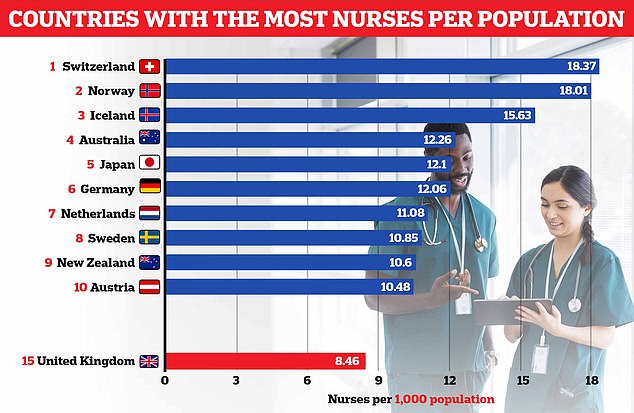 The UK ranks in the top half of the table for the number of nurses in relation to population numbers.

There has been a persistent shortage of nurses in the UK, with latest figures showing there are now 46,000 vacant posts across the health service. 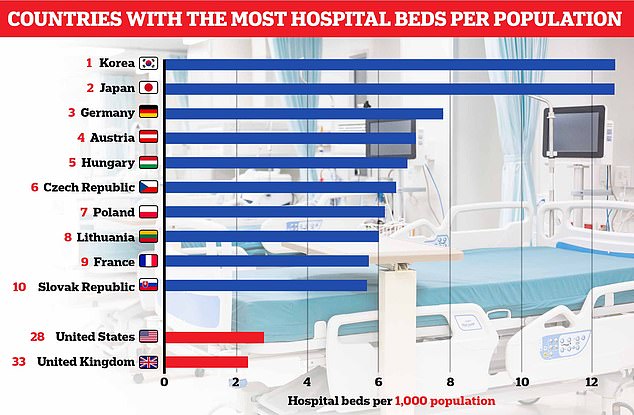 Graphic shows: None of the Scandinavian countries or the UK rank in the top 10 for the most hospital beds per 1,000 people, according to OECD data for 2020 and 2021 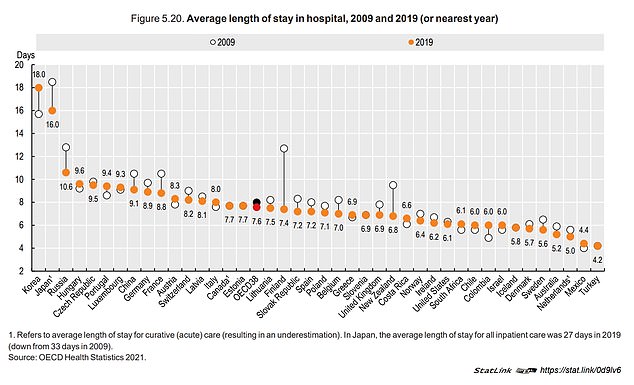 Graph shows: The average amount of days patients stayed in hospital beds from 2009 to 2019 in countries across the world

On top of a lack of beds, official figures show occupancy is high — with 94.3 per cent of beds occupied across England in October, on average.

And more than 13,000 patients spent more time in hospital than needed every single day in October — the equivalent of around one in 10 beds unnecessarily occupied over the whole month. Health leaders say this is fuelled by the bed blocking crisis. 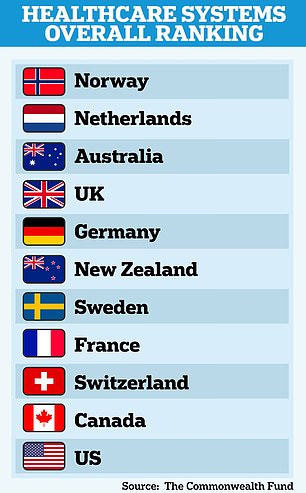 Britain ranks fourth in the world for its health service according to the Commonwealth Fund, behind Norway which is rated the best

The UK has the fourth best healthcare system despite consistently ranking low compared to other countries, according to a study.

US research foundation, the Common Wealth Fund, analysed healthcare performance across 11 high-income countries, including the UK, Norway and Sweden.

More than 70 metrics were examined, including access to care, efficiency and outcomes.

The results, released last August, show Norway, the Netherlands and Australia were the top three countries, while the UK was fourth — better than Germany, New Zealand and Sweden.

Free and universal access to doctors, a high-quality primary care service and few administrative burdens distinguished the top-performing countries from the worst, which was found to be the US. 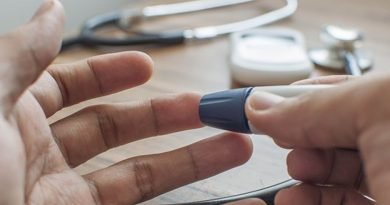 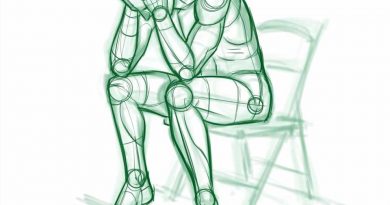 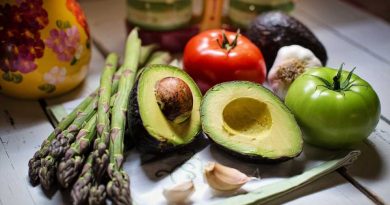