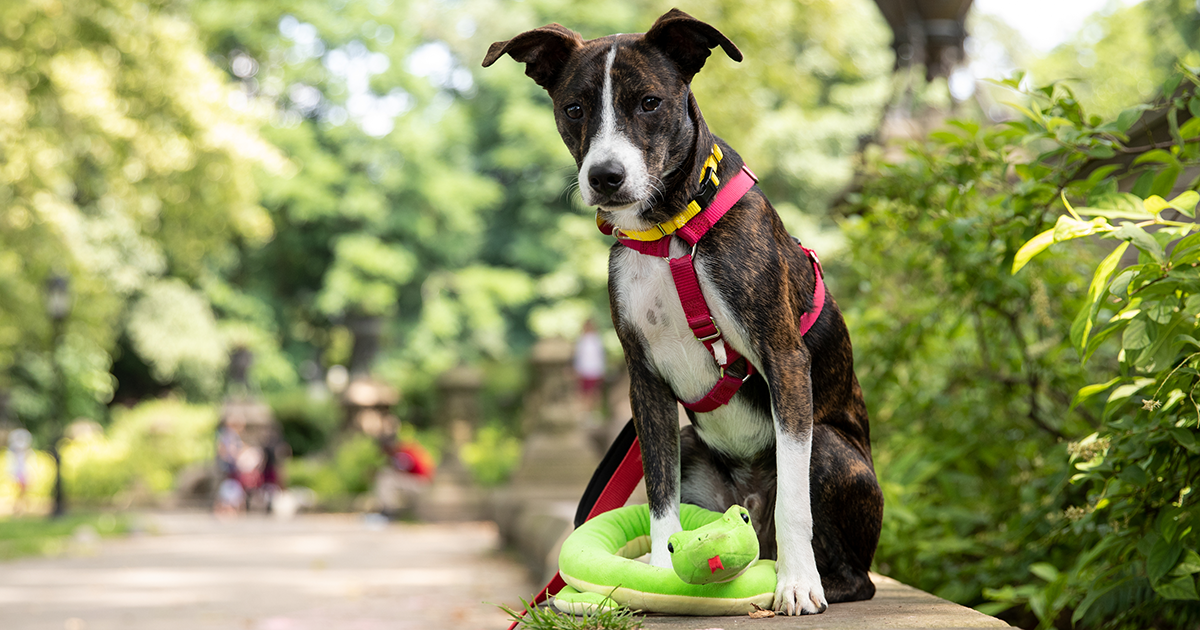 It’s still summertime, and hot weather is prime time for snake activity. It is estimated that there may be more than 100,000 venomous snakebites that occur in dogs and cats every year with a mortality rate of 1 percent to as high as 30 percent, depending on the size of the pet, the species of the snake and the location of the bite.

The ASPCA Animal Poison Control Center (APCC) wants to make sure you’re in-the-know about snake encounters and poisonings so you can keep your pets safe during through the rest of the summer.

There are four different types of venomous snakes in the United States:

Except for coral snakes, all the above are considered “pit vipers” and can be recognized by the following characteristics: 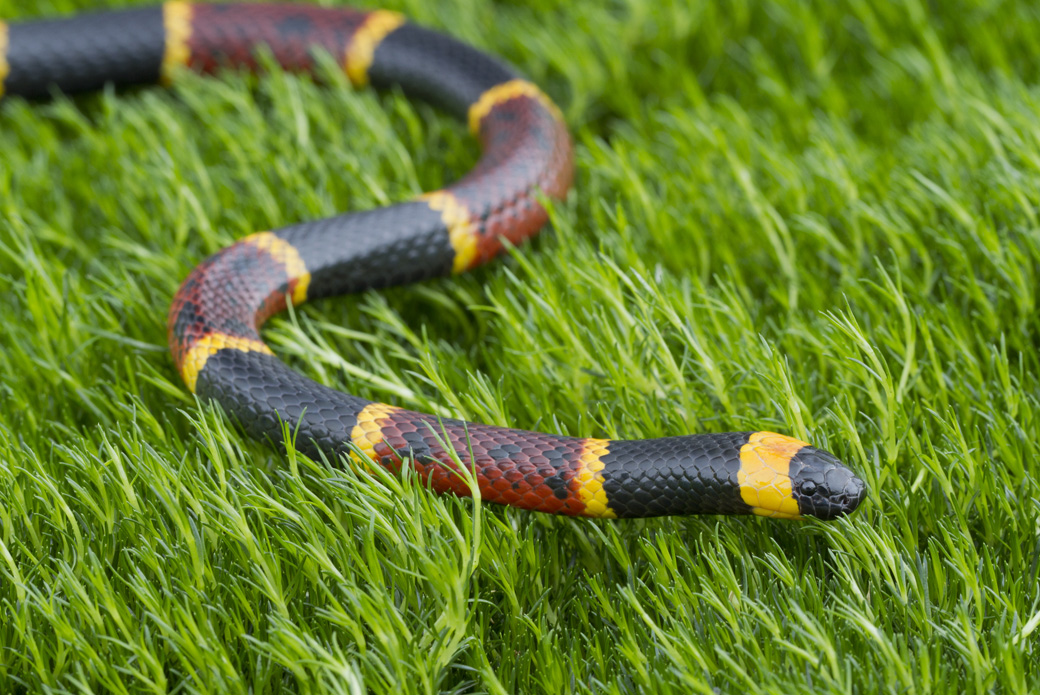 Coral snakes can be found in southern coastal areas from North Carolina to Louisiana, including all of Florida; separate species can be found in Texas, Louisiana, Arkansas and Arizona. While they have one of the most potent venoms of any North American snake, they are reclusive. Only around 15 to 25 human bites occur each year. Coral snakes are easily identified by their colorful red, yellow/white and black colored bands. Their venom contains a neurotoxin that leads to paralysis and respiratory failure in pets and people. 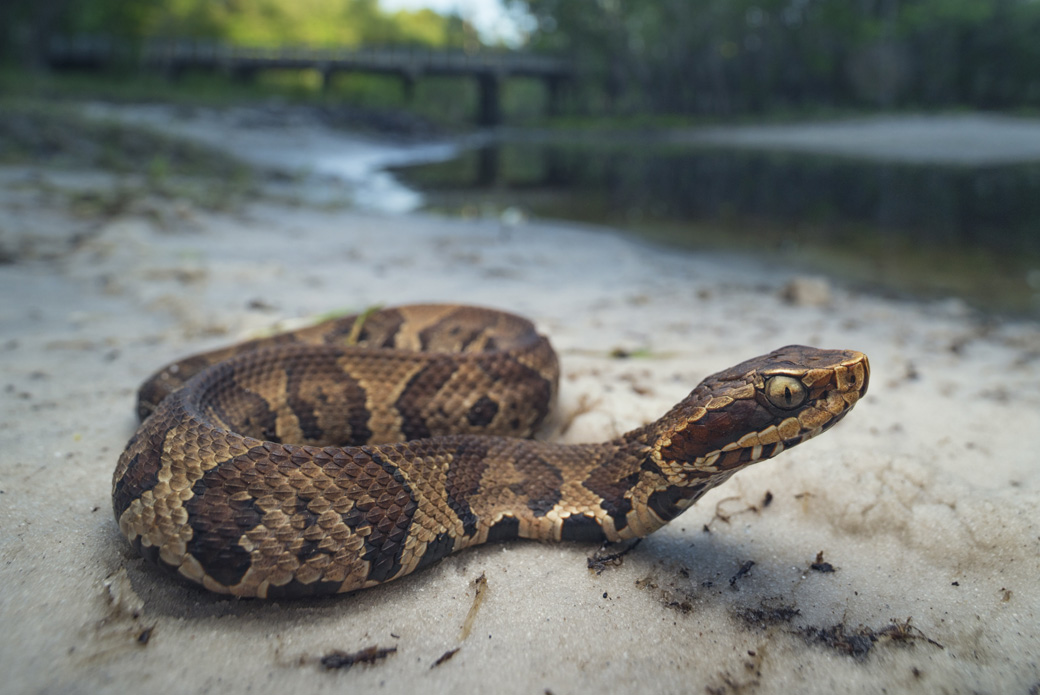 Cottonmouths are found in the southeastern United States from southern Virginia and Florida to eastern Texas and are often seen basking on logs and stones near swamps, marshes, drainage ditches and ponds. They have a reputation for being aggressive and are often confused with non-venomous water snakes. Their venom is composed of hemotoxins, which prevent blood from clotting and cause tissue damage. 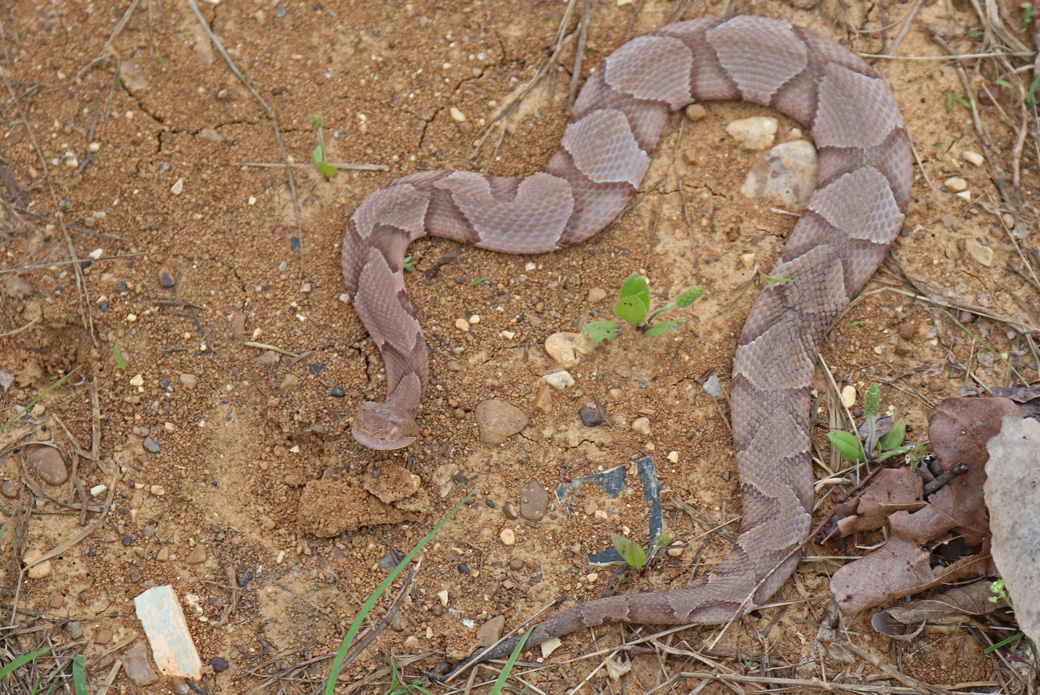 Copperheads have the weakest venom but are responsible for the most bites in people and can be found in many different habitats including suburban areas from southern New England to West Texas. They have distinct hourglass-shaped crossbands on their bodies and will vibrate their tails rapidly to imitate a rattle. Their venom is composed of hemotoxins which prevent blood from clotting and cause tissue damage. 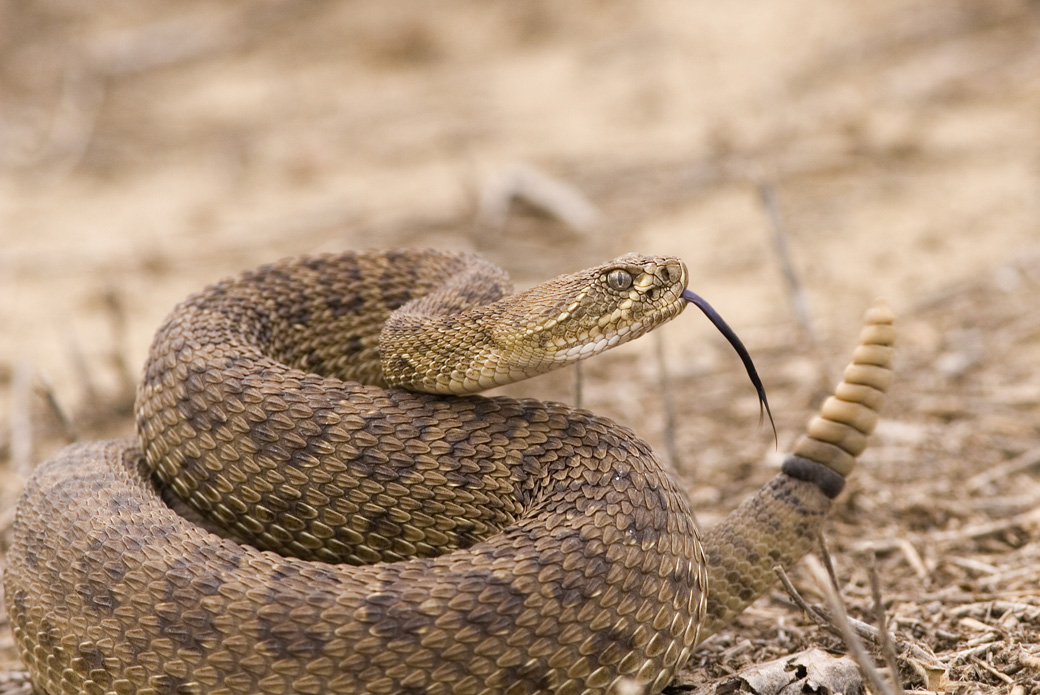 Rattlesnakes are the largest of the venomous snakes found in the United States and can strike one-third or more of their body length. Rattlesnakes are found throughout the country, though most commonly found in the West, in a variety of habitats including mountains, prairies, deserts and beaches. Most have hemotoxic venom and their bites are very painful. There are a few species (Mojave, Tiger and Speckled) that also have neurotoxic venom. The Western Diamondback Rattlesnake is considered the most dangerous species of rattlesnake and causes the most fatalities in people annually.

The best way to deal with venomous snakes is to do your best to avoid them in the first place. The most important thing you can do is keep your dog on a leash and monitor them while you’re out on a walk. That way, you can prevent your pet from sticking their face into heavy brush and their nose into rock crevices where snakes may be lurking. It also helps to stay on well-worn trails so you can see what’s ahead. If you plan to have your dog off leash in an area where venomous snakes are found, consider signing up for snake bite avoidance training. You should keep your cat indoors, especially if you live in an area where venomous snakes are common.

Currently, there is a rattlesnake vaccine available for dogs that produces neutralizing antibodies against Western Diamondback venom. While there is no evidence that it works for other venomous snake bites, it could theoretically decrease the severity of clinical signs and appears to be safe. Consider talking to your veterinarian about getting your dog vaccinated if you live in an area where Western Diamondbacks are common (Southeastern California, Arizona, New Mexico, Texas and Oklahoma).

The most important thing you can do if your pet is bitten by a venomous snake is to get them to a veterinarian as soon as possible. Carry your dog if possible and do not waste time performing first aid—sucking out the venom does not work, please do not attempt this!

Once you are at the vet’s office, they will start IV fluids and give pain medication to treat shock. Antivenom should be given if it is available and financially feasible. Sometimes multiple doses are needed to neutralize the venom. Tissue damage will develop and progress over a few days and sometimes extended wound care is needed as tissue dies off and new tissue grows.

Most pets will recover with prompt and appropriate treatment, but snake bites can be fatal. There are higher fatality rates for dogs who are bitten on the tongue or the chest and for pets who have a long delay between the time of the bite and treatment by a veterinarian.

If you experience a snake encounter with your pet, make sure to get to the emergency veterinarian and call the ASPCA Animal Poison Control Center at (888) 426-4435 right away. Stay safe out there! Medical mystery: woman gets 26 days after the first birth twins Woman who thought she was daydreaming was actually suffering epileptic seizures How your smartphone is affecting your relationship