Home » Health News » A cup of blueberries a day to keep the doctor away! A cup of blueberries a day to keep the doctor away! Eating 150g of the fruit daily ‘slashes the risk of heart disease by around 15%’

Eating a cup of blueberries each day slashes your risk of developing heart disease, according to research.

Researchers calculated this would reduce their risk of heart disease – the world’s leading killer – by between 12 and 15 per cent’. 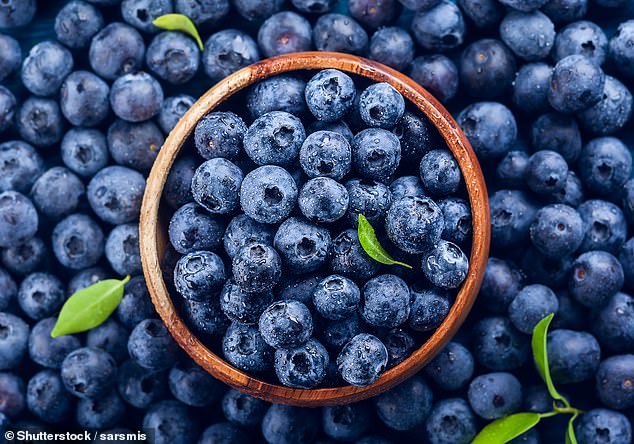 Scientists at the University of East Anglia tested the effects of eating blueberries every day on 138 overweight and obese adults.

They were all aged between 50 and 75 and had metabolic syndrome, the medical term for a combination of diabetes, high blood pressure and obesity.

Figures suggest around a third of adults living in Western nations have the syndrome, which boosts the risk of developing heart disease.

All of the participants were either given a 150g or a 75g portion size of freeze-dried blueberries, or asked to consume purple-coloured placebo.

WHAT IS METABOLIC SYNDROME?

It puts you at greater risk of getting coronary heart disease, stroke and other conditions that affect the blood vessels.

On their own, diabetes, high blood pressure and obesity can damage your blood vessels, but having all three together is particularly dangerous.

They’re very common conditions that are all linked, which explains why metabolic syndrome affects an estimated one in four adults in the UK.

You would be considered to have the sydrome if you have three or more of the following symptoms:

The results of the six-month-long study, considered to be the longest of its kind, were published in the American Journal of Clinical Nutrition.

He added that this makes ‘enough of a difference to reduce the risk of cardiovascular disease by between 12 and 15 per cent’.

Dr Curtis said: ‘The simple and attainable message is to consume one cup of blueberries daily to improve cardiovascular health.

‘Unexpectedly, we found no benefit of a smaller 75 gram (half cup) daily intake of blueberries in this at-risk group.

‘It is possible that higher daily intakes may be needed for heart health benefits in obese, at-risk populations, compared with the general population.’

He said previous studies have shown people who regularly eat blueberries have a reduced risk of type 2 diabetes and heart disease.

‘This may be because blueberries are high in naturally occurring compounds called anthocyanins,’ Professor Cassidy added.

The compounds are responsible for the red and blue colour in fruits. Other studies have shown they can improve some markers of heart disease.

Researchers from the universities of Harvard, Cambridge, Southampton and Surrey also chipped in for the results.

It received funding from the Biotechnology and Biological Sciences Research Council, which takes money from the UK Government.

And the US Highbush Blueberry Council, made up of blueberry farmers, processors and importers, also donated to the study.

Figures suggest there are around 7.4 million people living with heart and circulatory disease in the UK.

The American Heart Association says almost half of all adults in the US have some form of heart disease. Study identifies why some colds cause asthma attacks in children Study highlights need for integrated healthcare for the homeless Study reveals how much fiber we should eat to prevent disease